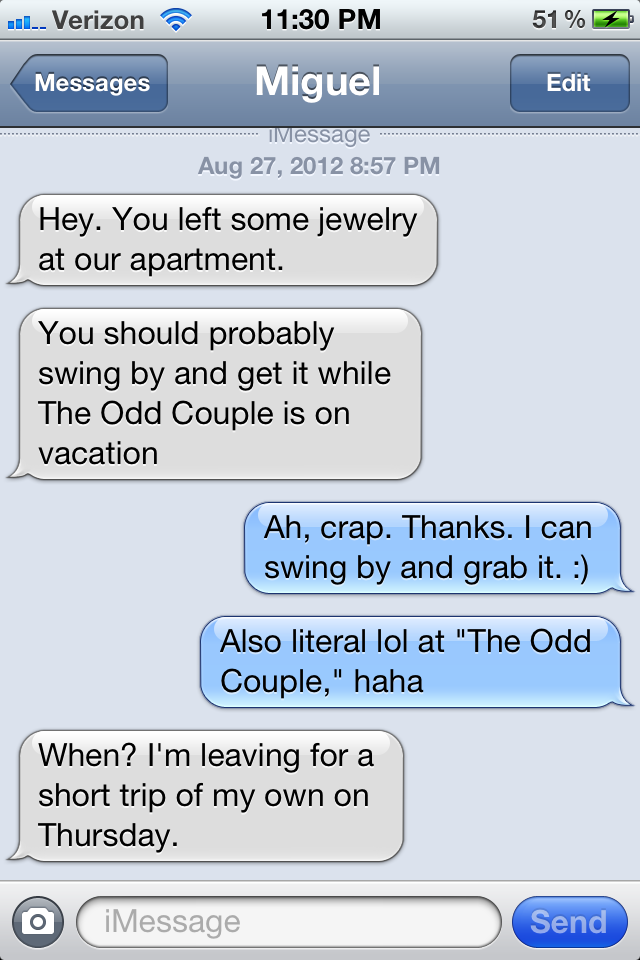 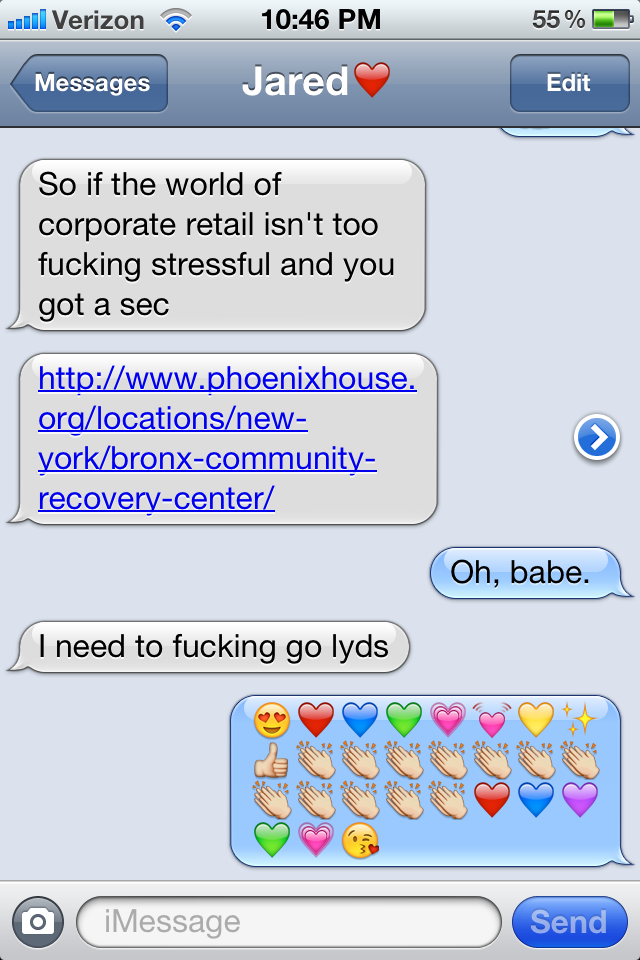 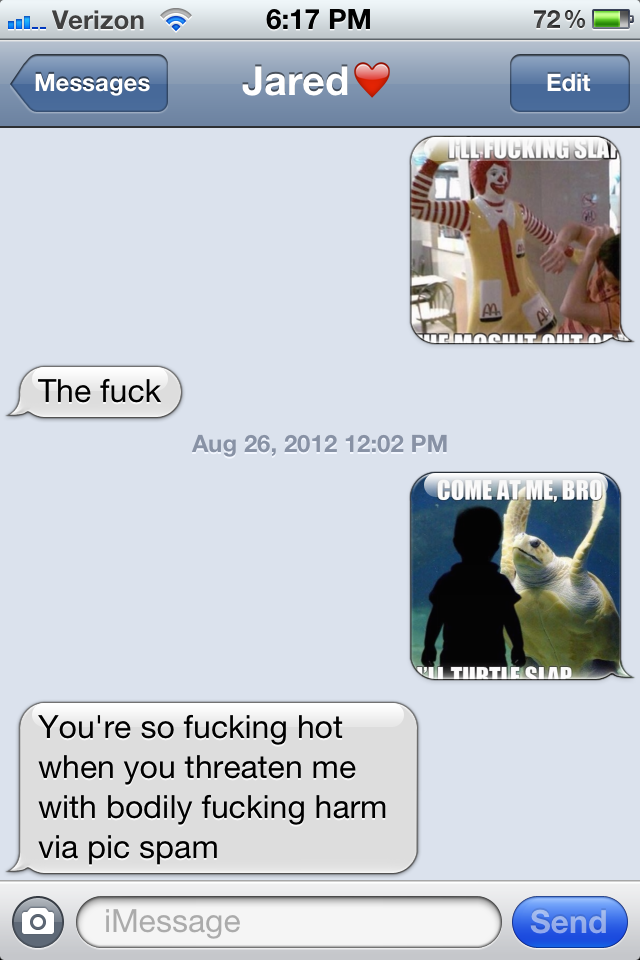 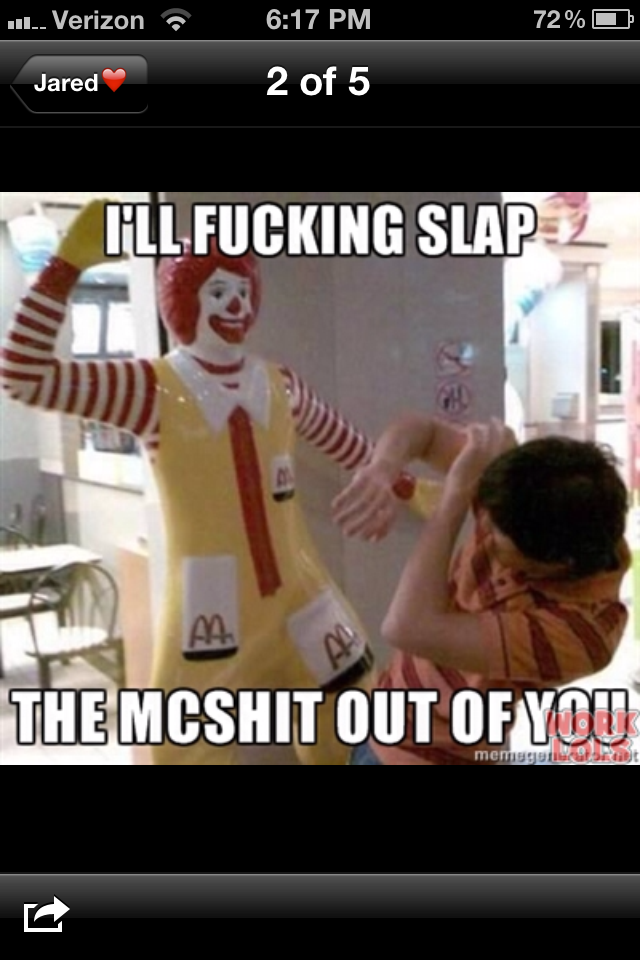 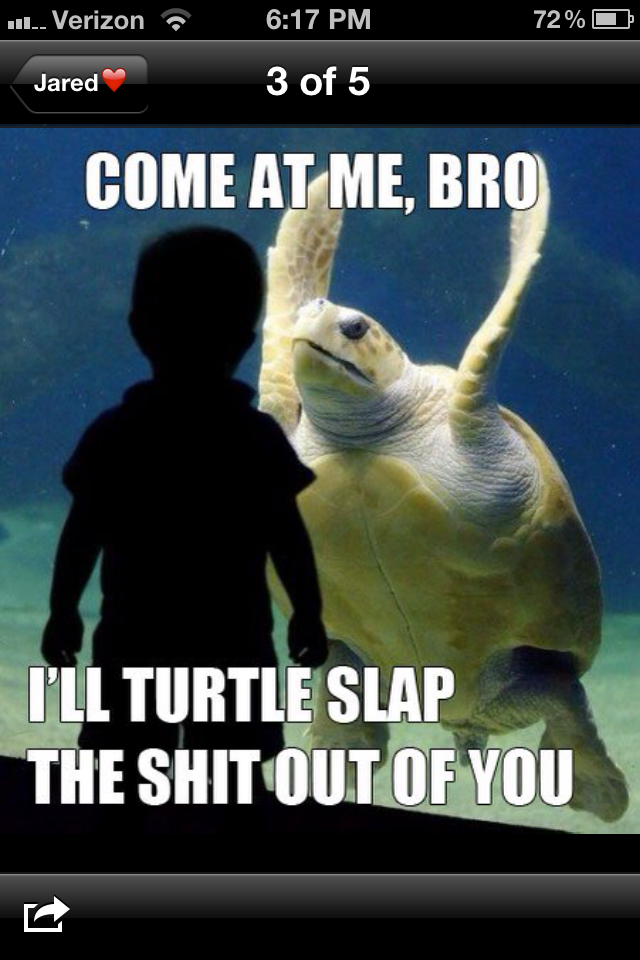 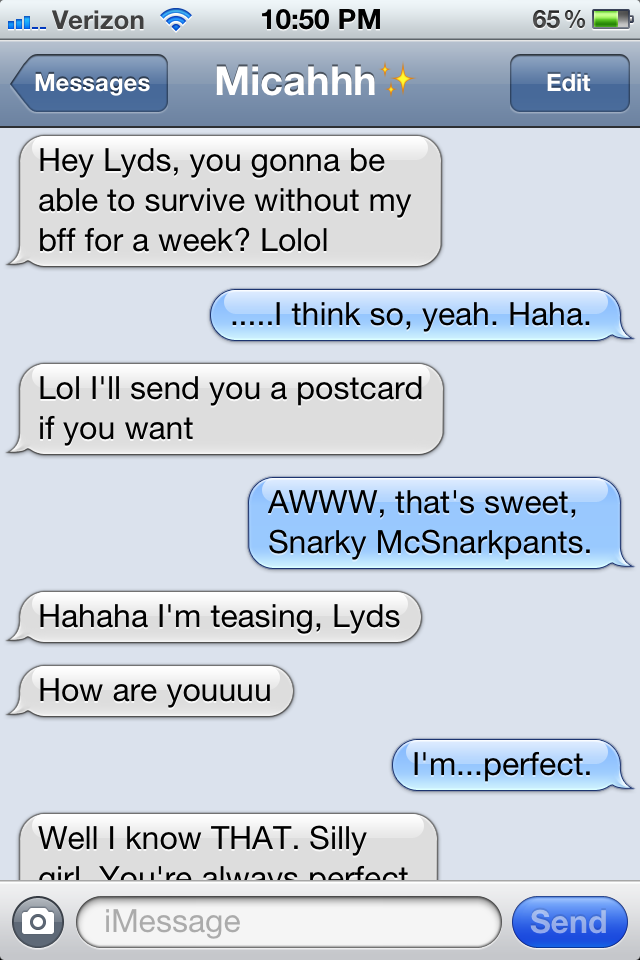 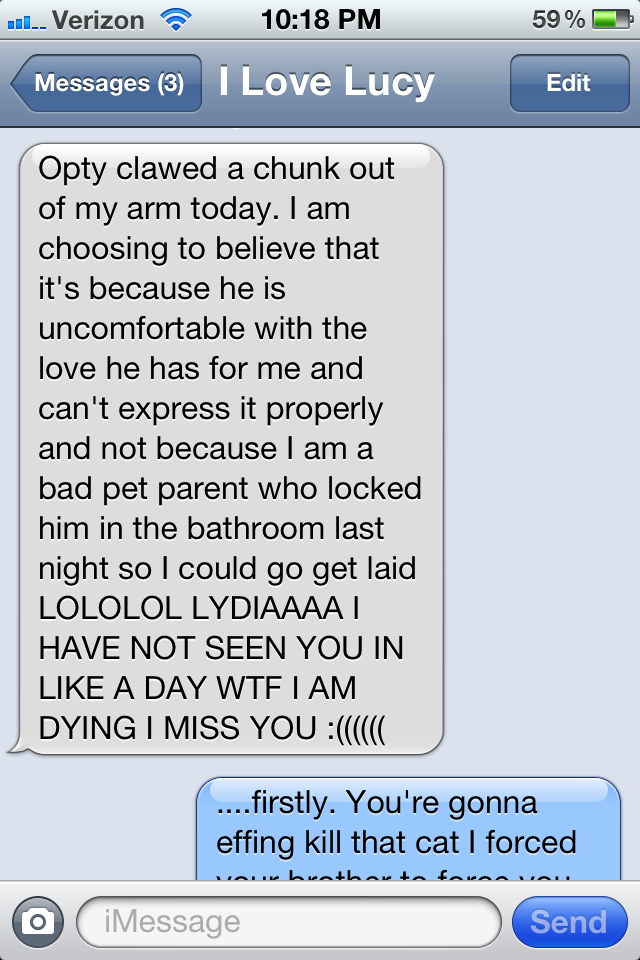 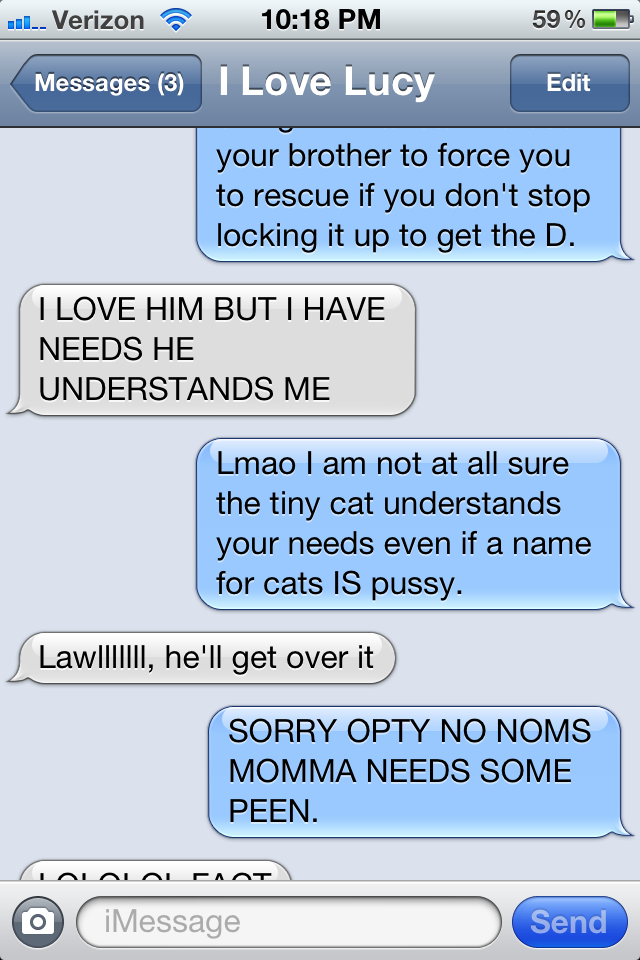 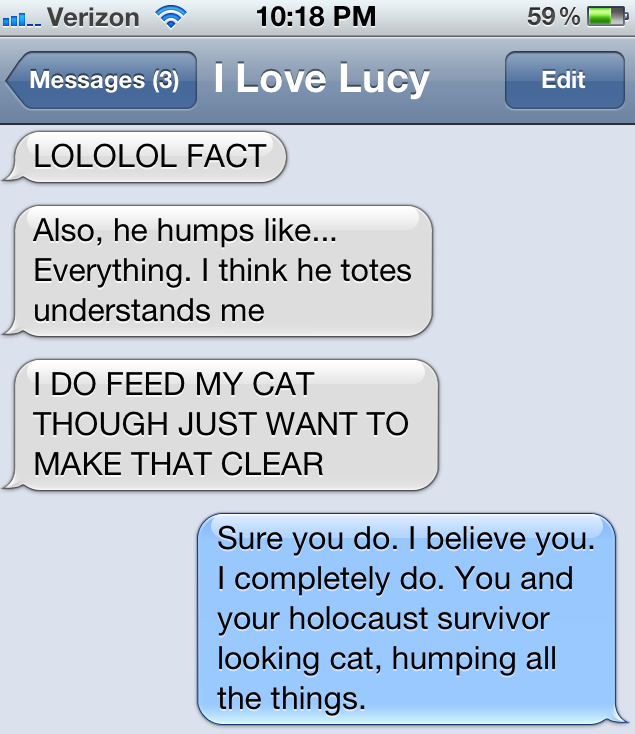 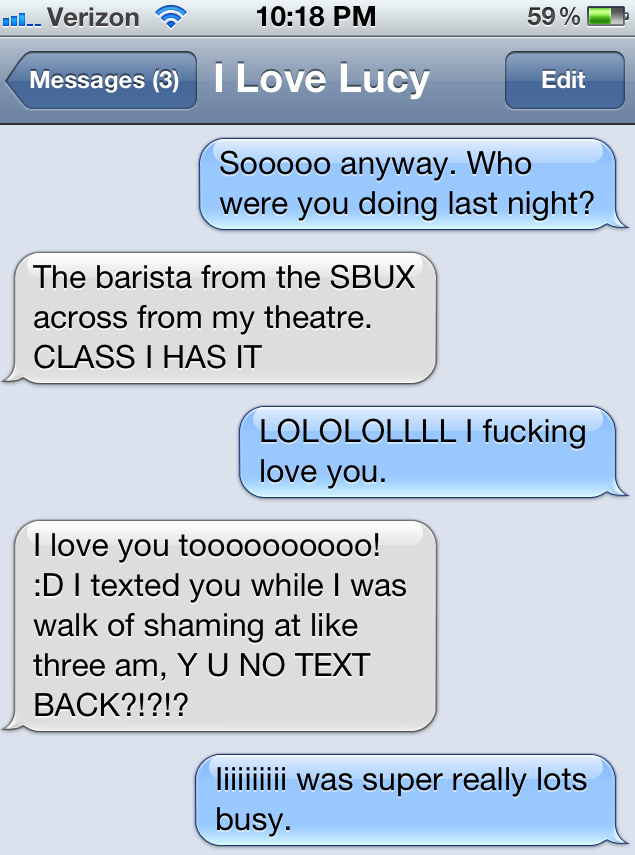 After what felt like hours but could have been only moments, Lydia sighed and leaned to the side, pulling them both over to lay on their sides, face to face, skin to skin, on the couch, and though he slipped out of her, she held her body tight against his, did not think even one tiny molecule of air could have snuck between them.

She tucked her head under his chin, her arms around him, feeling the press of his neck on her arm, the stick and warmth of his sweat, and she pressed her lips to the dip where either side of his collarbone met, tasting the tang of salt on her tongue.

How many times now had they said, "I love you," tonight, she wondered. How many times could they possibly say it? However many times, she thought, that they should have said it, said it like THIS, in the last three years, and didn't, as though each of them were trying to somehow make up for lost time, for unintentional hurt, for words they should have had the courage or the fucking clarity to say, but didn't.

This was fucking it. Motherfucking finally.

No fucking way. No fucking way had their kisses always been like this, a slow, steady burn that seemed to melt his fucking muscles out from underneath his skin. That spark, that intensity that had always defined whatever the fuck he had with Lydia was still there, but it'd cooled somehow. Less of a wildfire, more... he didn't even fucking know. Soothing somehow. Like the fucking medicine on his gashes or a gulp of Gatorade in the middle of a mind-numbing hangover.

"Jesus," he breathed, awed, against her lips. "I was fucking - so fucking - " he stammered in between kisses, cupping her face in his hands. "So goddamn, motherfucking stupid." He kissed her again, hungry but slow, a tamed sort of intensity. Whoever he'd fucking slept with or dated or loved, he always ended up back at Lydia's side, back in Lydia's bed. She had been the last person he'd seen, touched, kissed before he fucking overdosed, and she was the first one back at his side when he woke up. The utter hatred that Hannah hadn't bothered to hide, the furiously jealous glares Seth used to shoot his way back in the fucking day, even once the two of them were on equal goddamn footing, shouldn't all that have motherfucking told him something?

How were two people who were so fucking smart so stupid about something so goddamn obvious?

Jared had let Adam prod at him, poke at his fucking ribs, coat him in peroxide and Neosporin. They'd come to a tense kind of an armistice, but it was utterly fucking obvious that things weren't the same, maybe couldn't ever be the fucking same, after what they'd both said. After what they'd both done.

Before all this shit started, Jared hadn't really fathomed how needlessly fucking cruel he and his friends could really fucking be. They were all monsters at heart, fucking animals really, who couldn't stop hurting each other and couldn't stop loving each other enough to just cut their fucking losses and leave, no matter how much anguish it would save them all in the long run.

He spent three hours of silence, sitting on the grass where there had once been a fucking forest of fruit trees - and Christ, his heart had fucking stopped beating the day he realized that Oscar'd taken back his fucking forest - and staring up at the fucking night sky. Trying so fucking hard not to think about his throwdown with Seth or with Adam for that matter or Oscar or Lydia and suddenly, he couldn't fucking handle it any more. And the knowledge that all he wanted was a fucking line combined with the knowledge that the one thing he could not have was a fucking line made him want to motherfucking hyperventilate.

He had to fucking talk to someone, and he had no one to fucking talk to. Who could he fucking discuss any of this shit with? Adam? "Hey, kid, let's talk about how I pulled a fucking knife on that guy you fucked."

It started to rain suddenly, making the air around him thick and heavy and cloying and so motherfucking oppressive that he couldn't breathe, and Jared wanted to laugh a little. He was turning into motherfucking Charlie Brown. He stood, went to get in the car Derek had loaned him, realized he didn't fucking even know where he'd drive, and passed it up instead.

Jared walked in circles in the motherfucking rain for twenty fucking minutes and thought about nothing at all. As long as he kept fucking walking, it would be fine. He would be fine, they would all be fucking fine somehow.

He realized that his legs had led him to Seth and Lydia's house because where the fuck else would he be walking, his body reasoned, if not to write with Seth or watch reality TV reruns with Lyds? Slowly, he lowered himself down to the steps outside, letting his legs jut out in front of him like he'd done a hundred times since they moved in.

He had no fucking clue how long he sat there, soaking fucking wet and staring at nothing before the door opened. He craned his neck quickly; briefly terrified that it would be Seth, but it was Lydia with a cigarette clutched between her fingers and a look of shock on her face. Then he realized he almost would have preferred seeing Seth at the fucking moment. First time he'd seen her since he went fucking silent on the inside, but the silence was still fucking there, and Jared had grown to hate it. Fucking despise it. And seeing her face, fucking gorgeous even through her surprise, did nothing to help his fucking loathing.

"Don't fucking mind me," he muttered, turning his gaze away from her, running a hand through his hair and sending raindrops flying. "Just catching my fucking breath, and I'll be on my goddamn way. Wherever the fuck that is."